Ahhh, there's just something about a farm...

Maybe it's in our blood, each and everyone of us.  When humanity improved upon being hunters and gatherers, we became farmers, custodians of our own little plot of ground--even if it's a few pots on a city windowsill, or planters on a suburban deck. As humans, we emerged from a life of roaming, to a life of sinking roots, literally as well as figuratively.


Western Pennsylvania, USA, is known for its rolling hills. And that is one of the big challenges in farming here--the terrain. It also makes for some tragic stories. Farming, as an occupation ranks high among dangerous jobs. Add steep hillsides to that, and the risk greatly increases.  Twice in my dad's lifetime, he rolled a tractor. Thank all that's good--he managed to jump clear both times. Sometimes that's not the case.
The rolling hills give way to steep hillsides as the fields drop away to the creek bottoms.

We are just beyond the southern terminus of the glaciers during the last ice age. So our valleys weren't gouged out deep and wide by glaciers. They were carved by eons of moving water, some of them, one trickle at a time; that's what makes our hillsides so steep. Forests on top of hills--and part way down were cleared off for fields. The steeper land was used for grazing animals.

I grew up on a hillside. My dad used to kid us that we each had one leg longer than the other--so we could stand straight.

Photos: From the top of the neighbor's hill looking toward my home in the woods, and at the valley I grew up in: 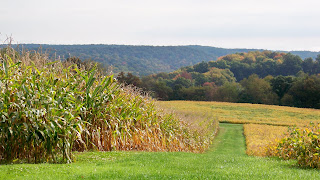 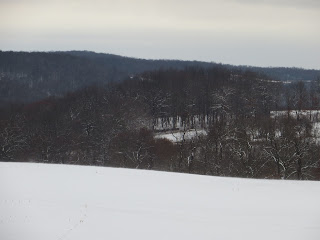 Generally, the farms here are old.  Many are Century Farms--an historical recognition of a farm having been in the same family for over a century. My family farm is a Century Farm.

It's evident how the fields end where the valley gets steep.

Farms were a way of life, and are now a dying thing. Road frontage is sold off, parents die and have no children who want to farm, so the inheriting child sells off. It's almost always a developer who buys the farm. Industrial farms have replaced larger family farms.  That has its good and bad sides.

While I sit typing on this western PA spring evening, the sounds of existence are outside my window. But they seep in, barely noticed until I listen. I'm overcome with what I hear. The quiet rattle of wind through the red tips of awakening maples, and the chorus of peepers in the hollow below the house. They are announcing the return, the rebirth, a tale of hope, of life... once again being told.

Life on a farm... It's all about life and death, it's about feeling the earth in your hands and comprehending that it is part of you, and you are part of it. It's the song of forever that the creek sings, and the smell of newly tilled earth in the spring. It's the lone tree left standing in the middle of a cleared field. It's memories of teams of horses that plowed the fields, and the laughter of children who knew no other life. It's the creaking of the stairs in the old farmhouse, as small feet climb alongside old and tired feet.

I have more springtimes in my past now than I have in my future. And that, though bitterweet in many ways, brings a certain wisdom, and a profound sense of humility and wonder along with it. How blessed to have lived long enough to feel the seasons change, not just see them change; how fortunate to have glimpsed the grand scheme.
Posted by Teresa Cypher at 11:41 AM