This snippet is from Emmily, Unbound, an SFR story about Emmily, a 40-something woman, and Gen Rael, an alien who crash-landed on Earth and took her hostage until his rescue arrives. Their fiery beginnings together have taken a turn. They're on the back porch together. Emmily just asked Rael if he has a mate at home.

Last week ended with this:

I exhale. My inner-fool will not be silenced.  I ask, “Why not?”

He rubs his forehead before answering. “I never found the woman who became my best friend, the female I want to share all things with, to trust to be on my side—as  your people say—'come hell or high water’, and I will settle for nothing less.” He pauses, then he sighs again. “Because of my rank, I am asking a great deal of her when I… It will be demanding. For both her sake and mine, I do not discount the challenge ahead for my chosen.”

The weight of his words coupled with his earnestness has me wondering. There’s a lot more to this than he’s saying. He’s watching me with such intensity, and then his face softens into a smile.

I say, “So much to consider when choosing in your culture.”

He nods and looks toward the ceiling of the porch—like the answer is coming to him from somewhere above us.

He says, “She must be intelligent, and she will know how to laugh.” He turns to me and narrows his eyes.

Is this intense look because he’s searching for a reaction to his words?

“She will have…” He cocks his head to the side, then he smirks. “She must have spunk.”

Next week, her reply.

Last weekend, we went for a drive to Buttermilk Falls, only an hour and 15 minutes from our house--but I'd never been there before. Fred Rogers (aka Mister Rogers) used to play there as a boy--his grandfather (his last name was McFeeley--any Mr Rogers fans will recognize that name) owned the farm the waterfall is on. Lovely park. In the pic, I'm with Leo the deaf Cocker, and we're behind the waterfall. Not much water going over it that day. 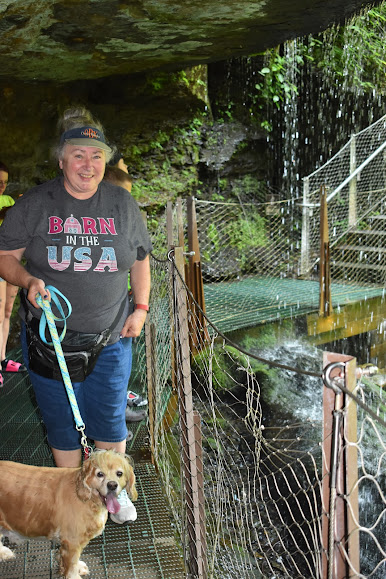