Today, author Steven Montano shares with us about his latest release, Red Tide at Morning. At the end of the post, I've left my review of the book. Thanks for joining us!

Teresa: You've been writing dark fantasy/dystopian for quite some time now. And you have amassed a respectable book catalog in that genre. It seems that when you write in the same genre, what happens in one story might actually spawn an idea for the next. Having said that, where did the idea of Red Tide at Morning come from?

Steven: I decided to write a murder mystery about a year ago, around the time both the Blood Skies series and The Skullborn Trilogy were winding down and I was trying to decide what direction to go with my writing.  My wife is a huge fan of the genre, and the challenge of writing a mystery novel appealed to me.  (I was further motivated when an author friend of mine, Joe Hart, went and wrote a thriller called The River Is Dark after he’d already made a name crafting horror novels; his effort really inspired me).

I’m honestly not sure exactly where the idea for Red Tide At Morning came from, but the first image I had in my mind as I put together the story was a slightly modified version of the opening sequence, with the dead girl being found in a small abandoned village on the island and all of the action taking place just ahead of a coming ice storm.  The early version of the novel was called Colder, and it had more occult ties and a “race against time” aspect that I eventually cut for the more subdued approach I took with the final version.

I didn’t continue working on the book at the time but kept it in the back of my mind, and I was about to delve into the project when inspiration for The Last Acolyte came at me like a bolt from the blue and essentially took over my creative brain for a few months.  Eventually I decided it was high time to finally write the mystery, so in preparation I binge-watched procedural police shows and read tons of mystery novels, and I conducted a crap-ton of research on forensics, police biographies, criminal psychology, true crime reports, etc.

Whereas normally at this point I’d just jump in with the writing, instead I continued to take extensive notes, mapped out the plot, and planned individual scenes and chapters down to an almost insane degree of detail.  It was...exhausting.  LOL

Teresa: That is fascinating stuff, Steven! It's always so interesting to learn what engages another writer's creative energies. And we're glad you're pushing through your exhaustion to talk with us. ~winking~  Can you share anything you've learned from writing a book in a different genre?

Steven: I think the biggest thing I realized the moment I started writing this book was that I would not be able to take my normal approach to drafting a novel.  Usually I like to come up with just a loose outline: a solid plot, a good sense of the ending, maybe a chapter breakdown with one or two major events per chapter, and that’s it.  That doesn’t really work with a mystery novel, where you have to carefully plan events from beginning to end and know exactly when and where you’re going to drop plot details so the reader uncovers them at the appropriate time.  Now, one could argue that’s the case for any novel, but I think it’s especially true for a book like this.

Research, as I mentioned before, was a huge factor for Red Tide At Morning, because even though I was writing about a fictional island the setting is the modern world, and I wanted very much to make sure I got the details right; that’s pretty easy when you know the fantasy/sci-fi world you’re writing like the back of your hand, but in this case I quickly realized I didn’t know @!#?@! about things like crime scene preservation, hacking into a cell phone, or what the inside of a Lutheran church looks like.  That led to even more research.

Perhaps most significant, though, is the difference in writing language.  In epic fantasy, it’s not only okay if you take a few pages to describe the landscape and important places, it’s practically expected.  In a mystery novel, details are important, but description itself is often kept to a minimum in order to allow better story flow.  Needless to say, this was tough for me, but having my wife go through the first few chapters with a chainsaw to hack away all excessive description (aka “65% of the words”) got me in the right rhythm.

It was easily the most challenging time I’ve ever had writing a novel.  It was also the most rewarding, and I’d happily do it again.

About the book:
RED TIDE AT MORNING
A dead girl on the beach. A college student found tortured to death in an abandoned cottage. An ex-soldier with a history of violence. A small-time drug lord whose influence is on the rise. A mysterious woman watching from the shadows. A camera pointed the wrong way.

Something dangerous is happening in Raven’s Passage.

Retired Detective Malcolm Stone hoped to never work another murder case ever again. After the tragic death of his partner on the harrowing streets of Philadelphia, all Mal wanted was to come home to the quiet Pacific Northwest island he grew up on and get on with his life. But when a shocking double homicide shakes the community, Mal finds himself pulled back into a world he thought he’d left behind.

Along with his step-sister Lara — a troubled loner with a keen investigative mind — Malcolm digs deep into the lives of the two dead girls, uncovering scars and secrets best left alone. Surrounded by suspects ranging from an ambitious drug dealer and his delinquent son to the psychotic ex-flame of one of the victim’s fathers, Malcolm and Lara race to find a connection between the victims and uncover the truth…before a deadly killer strikes again.

Embark on a dark and twisted mystery from the author of Blood Skies, The Last Acolyte and The Skullborn Trilogy. 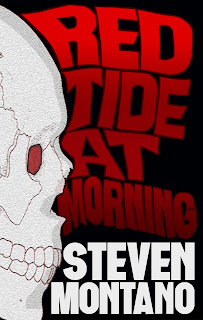 Teresa: Thanks so much, Steven! And now I'll share my review of Red Tide at Morning.

Let me first say that I think the book is outstanding, a real page-tuner. I read it during a particularly busy three day period. All the while I was busy with life, my mind kept going back to the story. I wanted to read more. I needed to find out whodunnit. :-)

Montano is incredibly adept at showing a story, at painting scenes. With his background in Dystopian-noir, he's well-versed in drenching a scene with descriptive writing. And that's great, because readers of Dystopian have never seen that world before. We need to have it painted for us by the author's words. But while reading Red Tide, I couldn't help but be amazed that he'd shifted away from drenching a scene with description, to moving to a style that fits murder/mystery so much better.

This story takes place here on Earth, in current times. That means we don't need have to have every little detail described for us like we do for genres like Dystopian and Scify. And Montano seems to have intuitively known how much description was enough. It painted a nice scene, but didn't bog down the action with too many details.

The pacing is fast. The hooks keep coming. The characters come to life. And it was easy to get caught up in the main character's world. Throughout the story, I guessed at who had done the murders. I was pretty sure a couple of times, but then Montano threw a new twist in the plot, or added a few more clues that forced me to rethink who had done the killing. In fact, you could have knocked me over with a feather when I turned the last few pages and realized who had done it.

Check out Steven's blog HERE for all the news about his books.

And he's on Twitter  Another great way to find out what he's writing.

Thanks so much for visiting!
Posted by Teresa Cypher at 12:13 AM 12 comments:

Hello, Warriors-- my favorite writers in the whole wide world. :-)  Another week has passed, so it's time for the Warriors to gather  again. :-)


Weekend Writing Warriors is a weekly bloghop. Each week, participants sign up HERE at wewriwa.com, then post 8 to 10 sentences of their work, published or unpublished, to go live between noon, Saturday, and 9:00 AM Sunday EST. Then we visit each other and read, comment, critique, encourage--all those things that do a solitary writer's heart good.
Snippet Sunday group from facebook--not us, but many of our participants do both, can be found HERE
This is Chapter 4 from my SFR WIP, Across The Night Sky . This week, a bit of thinking of going on.  Last week, the reader got a good look at the male MC  from the female MC's POV.  He's been injured. The final sentence was:
The corners of his lips turned up, then he relaxed against her shoulder and closed his eyes.

We continue from there:

At every sound, pin-prickles rose on her skin: metal groaning, an animal caterwauling, and a intermittent drip somewhere in the black unknown. She studied the man slumped against her shoulder. What was he?
She should run. She should at least be afraid of him. Names drifted to her from a history class she wished she'd paid more attention in: Attila, Genghis, Alaric. Christ, didn’t they butcher women and children along with the men? She looked into the darkness, focusing on nothing while she thought it through. In the end, she decided he was in no shape to hurt her anyway.

That's it. What works? What doesn't? I'm so very grateful for any comment or criticism you leave. :-)
Posted by Teresa Cypher at 11:10 PM 48 comments:

Hello, Warriors-- my favorite writers in the whole wide world. :-) Happy August!   And another week has passed, so it's time for the Warriors to gather  again. :-)

Weekend Writing Warriors is a weekly bloghop. Each week, participants sign up HERE at wewriwa.com, then post 8 to 10 sentences of their work, published or unpublished, to go live between noon, Saturday, and 9:00 AM Sunday EST. Then we visit each other and read, comment, critique, encourage--all those things that do a solitary writer's heart good.
Snippet Sunday group from facebook--not us, but many of our participants do both, can be found HERE
This is Chapter 4 from my SFR WIP, Across The Night Sky . This week, Marrisa is intrigued by his eyes.  Last week, the reader got a good look at him, from her POV.  The final sentence was:
Black as ebony? Only things in fairy tales are black as ebony, except of course, ebony.


We continue from there:

He winced while he tried to sit up straight.


She shuddered. His eyes really weren't right. Not only were they a weird shade of gold, the pupils were long and narrow. He had animal eyes. She wondered if he could see in the dark like cats did. And come to think of it, his eyes looked fever-glazed. Maybe it was just how they were? She laid her wrist against his forehead. The corners of his lips turned up, then he relaxed against her shoulder and closed his eyes.

That's it. What works? What doesn't? I'm so very grateful for any comment or criticism you leave. :-)
Posted by Teresa Cypher at 1:17 AM 38 comments: