Today, the very funny and talented Steven B. Weissman is visiting to chat about his recently published romantic historical fiction, Bountiful Creek.
TC:  Hi Steven.  Thanks for sparing some of your time today.  First, let me get this out there.  I read Bountiful Creek and absolutely loved it.
SW: Thank you, Teresa. I’m so glad you enjoyed it.
A little about the book: 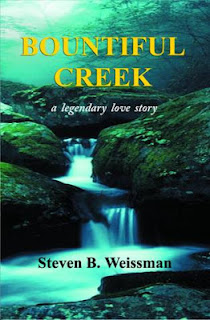 It’s here on Amazon: BOUNTIFULCREEK
And you can find Steven on facebook, here: Steven B. Weissman,Author

For anyone who doesn't know, Six Sentence Sunday is a bloghop--and one of the friendliest. Participants post six sentences of their writing, then the fun begins. Readers hop from blog to blog, sharing opinions, critiques and encouragement.  We know what a solitary pursuit writing is--and Six Sentence Sunday is a great way to meet other writers, and take a break from our solitude. Complete rules and a sign up form are at the site here.


Returning to ATNS this week.
Marissa has spent a few nights at a homeless shelter. Her clothing--from donations made to a local church, is new to her. She's clean, her hair is combed, and she isn't carrying her ratty backpack. She's just recognized that people are acknowledging her as she walks, that she is no longer part of the invisible and unwanted homeless.


"Ready to cross the street, rage  blinding her, she stepped off the curb to the sound of tires screeching. Looking through the windshield of the abruptly stopped car, she was met with a face full of annoyance.  But as the driver held her eyes, he motioned with his hand for her to cross and then he smiled.

She started walking, but then stopped, brought her fist down on the hood of his car and shouted, “I was a human yesterday too!

The tires squealed in reverse, the driver backing up just enough to swerve around her. “Crazy bitch!”

All comments, opinions, criticisms, greatly appreciated and graciously acknowledged.  Thanks for visiting, and have a wonderful week, all. :-)
Posted by Teresa Cypher at 1:58 AM 30 comments:

The Blurb
“One bite starts it all . . .
When Joshua Grant vanishes days before his wedding his fiancée Remy is left with only bruises, scratch marks and a hastily written note. Heartbroken, she sets off alone to find him and begins a long journey where strange things begin to happen.
As Joshua descends into his new immortal life he indulges his thirst for blood and explores his superhuman strength and amazing new talents while becoming embroiled in coven politics which threaten to destroy him. But Remy discovers a strength of her own on her quest to bring Joshua home.
Fate toys with mortals and immortals alike, as two hearts torn apart by darkness face ordeals which test them to their limits.”

I'm not often a reader of Vampire Tales, but this one sucked me in.  The story was good, the characters engaging, and the plot was full of twists and turns that kept me turning the pages.

Excellent job by Carlie of fleshing out the characters.

Remy's character was never pathetic--although her situation entitled her to it. I admired her tenacity as her search dragged on.

Josh--and the coven he lives with? So well-written.  They were the real entertainment in this book. The dynamics of the vampires were quite fascinating.  And I loved how Carlie wrote their predatory nature.  Simply indifferent to what they must do to humans to survive, yet their emotional responses to each other are very strong.

A lot of well placed foreshadowing lent an air of impending conflict, pain, or change.

And (spoiler alert) the end is a zinger!  But, it's set up nicely for the sequel.

Hope you're working on that, Carlie! :-)

Carlie M A Cullen
Carlie M A Cullen was born in London. She grew up in Hertfordshire where she first discovered her love of books and writing. She has been an administrator and marketer all her working life and is also a professional teacher of Ballroom and Latin American dancing.
Carlie has always written in some form or another, but Heart Search: Lost is her first novel. This is being launched 8th October 2012 through Myrddin Publishing Group and work has started on book two: Heart Search: Found. She writes mainly in the Fantasy/Paranormal Romance genres for YA, New Adult and Adult.
Carlie is also a professional editor.
Carlie also holds the reins of a writing group called Writebulb. Their first anthology was published September 2012.
Carlie currently lives in Essex, UK with her daughter.

I invite you to check out Carlie’s book at:
Amazon US http://amzn.to/OLwU59
Amazon UK http://amzn.to/PhC0Gu
Also, visit Carlie at:
http://carliemacullen.com
http://twitter.com/carlie2011c
Thank you for visiting!

For anyone who doesn't know, Six Sentence Sunday is a bloghop--and one of the friendliest. Participants post six sentences of their writing, then the fun begins. Readers hop from blog to blog, sharing opinions, critiques and encouragement.  We know what a solitary pursuit writing is--and Six Sentence Sunday is a great way to meet other writers, and take a break from our solitude. Complete rules and a sign up form are at the site here.
Returning ATNS this week.   As promised, Marissa is writing a journal entry to her counselor, Rayanne.

"I felt sick when I woke up—right in the pit of my stomach, the kind of sick that only fear causes.  There was no comfort in my dream... just terror.  It was so real. I know I can’t explain it to you, Rayanne, but I’m sure that dreams shouldn’t be like this. I recall every detail--like a memory.

That dream crossed from the last real memory I have before two years of my life became a blank—my last, precious recall of normalcy before craziness and dreams wiped it all away."


All comments, opinions, criticisms, greatly appreciated and graciously acknowledged.  Thanks for visiting, and have a wonderful week, all. :-)
Posted by Teresa Cypher at 1:11 AM 18 comments: