Welcome Warriors, and Snipsuns.  So glad you could stop by for a visit. :-) I can't believe that summer is pretty much kicked in the butt.  I hope you're all having a good Labor Day weekend (end of summer holiday in USA)

The travelers are now on the boat that is taking them upriver into the Firce Mountains.  Tayden has just asked Wiley(river driver) if his Maker ever answers when he talks to him.  Wiley's begun to answer.  :-)  We are still in Kad's POV.


All eyes were glued on the boat driver as he looked upriver,  corrected his course just a chin hair, then continued. “Since ain’t none of us going nowhere for a good hour yet, let me tell you a story.

S’quite a while back, before this hair was gray, and long before I’d gotten the ideas of right and wrong honed to a humble shine. I was hauling a fare in my first boat. Common sense told me after one look at the black sky, that dry land was the place to stay. But I was young and invincible. I took the man’s money and gave him a promise to deliver him where he paid to go."

That's it. What works, what doesn't? Thank you so much for visiting and sharing your opinion! It does mean so much.


TC: Today I’m welcoming Scifi author, Ian Bott who recently published his debut novel: “Ghosts of Innocence”. Welcome, Ian. Thanks for sharing some time with us!

IB: Thanks, Teresa, it's great to be here.

TC: First, I want to share this with you. As you know, I write scifi/romance and some fantasy. My daughter remarked to me a while back while I was considering using a pen name rather than my real name, Cypher,  that “Cypher” is a really cool name for a scifi author. I mulled it over and decided that she’s right. No pen name was needed; it was the best scifi author name possible. That was… until our paths crossed. “Ian Bott” might be the all-time, best-ever, scifi author’s name, even if it is a pen name.

IB: Well, I've always wondered about the "Cypher". Believe me, you are streets ahead in the cool names business - and even cooler that it's your real name!

TC: Thank you. I’ll be sure to send my daughter the link to this post!

I’ve read Ghosts of Innocence—and it’s a great story. It has a tough and smart main character, Shayla Carver. It has other worlds, space travel, political agendas, and a brewing revolt. All the things that add page-turning conflict and tension. Where did the story came from?

IB: Thanks! And glad to hear about the conflict. I was getting critiques on a different story - my first attempt at a novel - and it was clear that I didn't have enough (read "any") action or conflict early on. I struggled with how to achieve this, and got frustrated.

"Action?" I thought, "I'll give you action!" and I dashed off an opening scene with a crashing starship. There - enough action for you?

The first two chapters came easily, then I realized I had to actually turn it into a story. What was Shayla doing there? Why was she toasting a starship? What did she plan to do? What happened next? You get the picture.

TC: “Action? I’ll give you action!” Yes indeed, and you did. You put your characters in a situation and they took off. Then, for the first two chapters, you had to keep up with them and write down what was going on—you were a pantser. After that, you were a plotter?   Are you usually a plotter or pantser?

IB: Both. Or neither. I like to have a high level plot, and then flesh out bits here and there. The story emerges like a ship in the fog, a shadow, then details coming clear as you get closer. Sometimes I'll write scenes with only a vague idea how they fit into the overall picture.

One thing I can say with certainty is that I don't start at the beginning and write to the end like a true pantser. I write until I get stuck, then leap ahead to a section that interests me. Eventually I'll come back and fill in the gaps.

TC: It’s always interesting to learn the way writers approach each project. You must be very organized to be able to jump to other parts of your story. Now that the book is finished, looking back, what do you think was the best moment while writing this book?

IB: The whole thing was fun, but the best moment was writing "The End." Knowing that I could say "I've written a novel." That was the goal I'd set myself at the outset. Thoughts of publication didn't come until later.

Next best moment I think was unwrapping the package from the printers and holding my first paperback in my hands - and seeing my own artwork on the cover. That was another long-standing goal of mine. 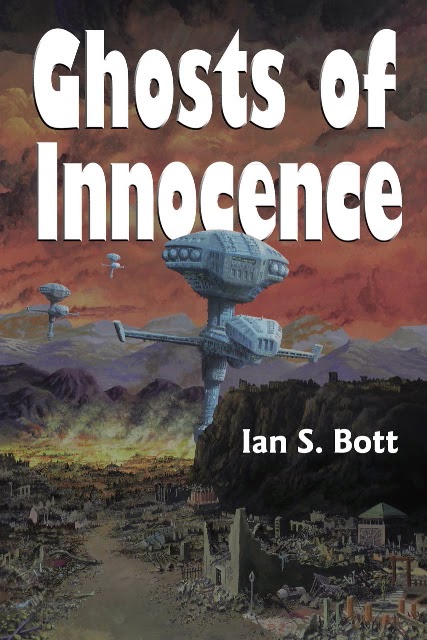 TC:  Your artwork is simply beautiful! I posted it in a x-large format so it could better appreciated. Your attention to detail is outstanding, yet the details don’t take away from the visual grandeur of the scenes. Stunning…

“The End” Such a proud moment! And the other side of the spectrum—what was the most difficult part of writing this book?


IB: Coming up with the plot, and with plot twists. I envy writers who have endless ideas for "what happens" bubbling out of their heads. I can see setting, characters, dialogue, but struggle with "what happens." I find it especially difficult to get my characters into enough trouble to liven things up - and then out again. Some writers excel at getting their characters into trouble, and then deeper and deeper.


TC: What was your solution?

IB: Hmmm...I'm not convinced I've really solved it. I brainstorm a lot. This is where the "plotting" side of me comes out. I map things out in diagrams - timelines, swimlanes, cause and effect networks. I work out where I need to be and thrash out creative ways to get there. It's hard work.

One thing I've learned to pay attention to, which helps sometimes, is what happens to the characters off stage? They're not sitting in a dressing room waiting for their next turn in the spotlight. They have their own lives to lead and their own motivations for aiding or interfering with the protagonist's plans. What are they up to? That can lead to some interesting twists.

TC: A good thing to remember—what’s happening when the characters aren’t front and center.  If you could offer one piece of advice to other writers, what would it be?

IB: Treat all advice with a mixture of caution and respect.

There's a lot of advice out there, some consistent, some conflicting. It's worth paying attention to - there's a reason why people say to limit adverbs, get rid of needless words, show don't tell - but slavishly following even the best advice can kill your voice and suck the soul out of your writing.

There is a place for adverbs. Sometimes showing can slow the pace and a quick tell is what's required. Don't be intimidated by critiquers waging war on every tiny violation of "the rules". Choose carefully when to follow advice and when to set it aside.

TC: I think that’s sage advice. Well said!  Now, one silly question before we’re done. If you could have a bulldozer or a helicopter to play with for one day, which would it be?

IB: Helicopter. No hesitation. I've always wanted to fly in one. But while we're in fantasy mode let's go the whole hog and make it a Bell Huey with a 1000W sound system hanging off each side belting out Ride of the Valkyries...

TC: A true writer you are! I got the visual—along with the sound. Nicely done!  I want to thank you again for sharing not only your time but your experience and knowledge with me and my readers.

IB: It's been great visiting, Teresa, thanks for having me.

Ian is celebrating his book release by giving away three ecopies to three lucky (randomly chosen) commentors on this interview post.  All you have to do to be entered is leave a comment here.

And to better your chances of winning a copy, head on over to goodreads where Ian is running a giveaway. You could win one of three paperback copies!

Ghosts of Innocence is available for Kindle and in paperback at Amazon It's also available in major e-book formats (Apple, Nook, Kobo) at online stores listed on Ian's blogs: Views From the Bald Patch and Ian S. Bott, Artist and Writer

Welcome Warriors, and Snipsuns.  So glad you could stop by for a visit. :-)  Holymoly! August is whupped. Next weekend is Labor Day (end of summer holiday in USA) ! Yikes!

A quick note. It's time to change out the free promo spots on the right sidebar of the wewriwa blog. If you're interested, drop us a line at wewriwa @ yahoo dot com . If we don't get you posted this time, we'll get you the next.

Someone commented last week about the word, "juman". It is a change up on the word "human" and it is what these people are--with the exception of Tayden, who is an Albainne.

The travelers are now on the boat that is taking them upriver into the Firce Mountains.  Tayden has just asked Wiley if his Maker ever answers when he talks to him.  :-)  We are still in Kad's POV.


“Yep. Back when I was wet behind the ears, not river-taught yet. But I got by just fine cause of already knowing
everything.”
Tayden’s brows pinched and he started to speak, but Kad cut him off. “He’s making a joke at his own expense.” Kad turned to Wiley and added, “He’s a little slow at times, picking up on humor.”
Wiley stopped smiling, and his tone had lost its lightheartedness when he said, “My Maker answered me real clear. And it was a question I didn’t even know I was asking."

That's it. What works, what doesn't? Thank you so much for visiting and sharing your opinion! It does mean so much. 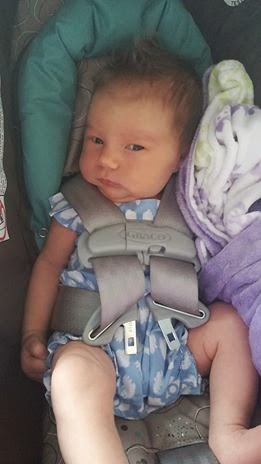 Real world news... Granddaughter number 2 "Ava" arrived Monday morning just before 9:00 AM. She weighed just shy of 8 lbs, and had a full head of hair.  This photo is of her arriving home late Thursday afternoon.