Today, while running through my mental list of stops along the Christmas marathon, I thought about getting our tree--a live one, the blank canvas on which we will create a masterpiece, the perfect one. Yeah, that's it: the perfect one.

By the time we get it home, we will have trekked across acres of tree farm, chosen and unchosen at least a half a dozen different trees, decided that the one farthest from the Jeep is THE one, had saw in hand aimed and ready only to decide that the one closest to the Jeep is actually much more perfect. (Are there really degrees of perfection?)

Every year.  Yep.  Every year it happens just like that.

With Clark Griswold in mind, we'll have it tied to the roof of the Jeep--which, with a long stretch of the imagination, resembles a station wagon.

My thoughts wandered as my mind wondered.  A quote got stuck in my head.  Unlike a notorious song (think Dominic the Donkey) that gets stuck in a person's head, and then plays and replays and replays some more, there was nothing unpleasant about the quote.

Reminiscing about Yuletides past, I recalled a Christmas eve.  The kids were all here to help decorate the tree...and decorating the tree has never, ever been just a chore that must be done. No far from it.  It is a sweet, nostalgic journey through my history, my children's history and it becomes, in effect, story time.

Tim, son-in-law to be at the time, was part of the tree trimming that year.  And being so new to the family, he didn't already know all of the stories. So they were told with such relish...and perhaps exaggerated a 'tiny' bit.

We sorted through the ornaments after DdotCdot put all of the lights on, and <blush> no, there was not a problem with that set of lights...remember? Even though they didn't light when they were plugged into THAT outlet???  Why must we forget, every year, that a light switch on the wall controls power to THAT outlet.

The tree was a con-color...and it cost way too much, but con-colors smell of tangerines, so we splurged  Every tiny pinch of pine needles gave way to the heady fragrance of citrus and pines and recollections of other Christmases.  The needles were soft; I had long before ceased giving into the urge for spruce trees.  Nothin' pretty about choosing to trim a tree while wearing leather gloves, or else bleed..

The ornaments came out of the boxes, one by one, and I watched as they graced tender branches with colors and shapes, noting how areas on the tree were framed by groupings of them.

I smiled while listening to Zigzee and Tim discuss, and then agree, that it was okay to have groupings of similar Mexican clay ornaments.  I spoke out of habit, like I was reciting part of a memorized family tale, "The ornaments were a gift from Carol, one of my dearest friends."

Grandma Painter's ornament, my inheritance from her via my mother, as always, took a place high on the tree. My daughter just knows.  Old, glass, and my mom is no longer here to give me another, it's not a beautiful ornament by any aesthetic measure.  In fact, the old blue paint is rubbed off and chipped in places.  But the train wrapping around its sides is still clearly discernible as such.


The ornaments go on, quickly at times. Zigzee and I discussed just which sheep ornament is the 'old goat'.  We determined that one is, indeed, the ornament that she proudly told her grand-pap (23 years earlier) was him because he "Was an old goat." and I laughed at the words as she spoke them...

Ah yes, this ritual has been repeated oft enough that she knows the stories...and they have become part of her history...part of her Christmas ritual.

And the other sheep?  Well of course, it was Abe's... Abe Keck.  And Zigzee added "He was such a nice guy.  It's really neat how he made a different ornament every year to give to all of his friends."

I smile and nod...and know that she can't imagine how inside I cry, remembering...  My dad...my mom, my grandma...old Abe Keck...yes they were real treasures,  And I began to grasp the thought that this was the essence of the tree ...for me.  Memories and reminders of people who would never be forgotten; people who have touched our lives in such loving and wonderful ways...and we give them these few moments...every year, with only shiny baubles and wooden trinkets as memory prompts.

I placed the Dixie-cup bells (covered with aluminum foil) on the branches...and smiled as I realize I have done them as a paired 'grouping', lol... but inside a sob threatened to surface for all to see. I recalled tiny hands and proud faces as the bells were presented to me, years ago.

Next I found the 'sugar' scoops that were made in a high school metal shop class.  And then Zigzee reminded me again that I originally had it all wrong, "You know mom, I did make the sugar scoop. I liked metal shop; it was sewing class that I didn't like. It was the green apron that I paid someone, with my lunch money, to make for me."

I smiled at her sheepishly...imagining that I had ever gotten that one wrong. I can hardly wait to tell her children when the day comes, or the evening, while we hang that ornament on Grandma's tree!

I hung the sparkly drummer boy made of metal, on a lower branch. It could take the fall if it was bumped off by one of the dogs or a hasty passerby.  I saw glitter as I looked at it, but it was the glitter in Natters eye's that appeared to me. A little two year old nightingale, singing "Wumpapumpum" I actually giggled a little as I recalled his sincere efforts to hit the high notes.  He was indeed, my little drummer boy...

Followed next was a dated rocking horse...baby's first Christmas 1986.  I blinked back tears.  Astounded, pained, and humbled...where on earth had 20 years gone?

Tim asked if we had a pickle ornament and a spider to put on the tree?

I was caught without either.

So he told us that the pickle was for good luck. (I'll search for one for next year's tree) then I smiled at the thought, if the truth be known...I'm already lucky.  Look at my life? But, then again, who would turn away good luck? I'd look for a pickle.

The spider story he told us, was about a tree that was beautifully decorated, but  a spider wanted to add to it. So he crawled on the tree and spun his web all over it.  When Santa, or God (two versions) saw the web, to spare the feeling of the spider who had the best intentions, turned the dull gray web into shiny silver...and that's the story of how tinsel came to be put on trees.

Next, I placed the angel stretched out over an iridescent glass bubble, on a high branch...twin to one that I bought for my mom at a high end Christmas shop.  But this one I found at a flea market for a quarter... and I thought that it shined a little nicer for that.

And there were the handmade beaded and quilted and tasseled ornaments, Victorian in appearance, yet they blended in with this eclectic assortment of love and sweetness, history old and new.

Yes...they came from the flea market too, and they are classy, but that's not the reason they hang on my tree year after year. I can still see the man's face as he told me his story

As I hung the ornaments I heard his voice tinged with wistful longing for a life that was anything other than the one that had wended its way to his front door.  His wife had developed severe dementia...and she was far more than he could  care for alone. So they'd entered into an agreement with a retirement home. It was one that could give her the care that she needed but still allowed him to stay near to her. But he had to sell their home to pay for the room and the care. So there he was, parting with the trappings of his life for a quarter here, half a buck there.

And in that moment, his memories became mine, part of his history became permanently intertwined with my history...and the sweetness and the sadness of their life was marked upon mine.  I know that mark will remain for as long as my mind is able to recall those moments we shared at that flea market, reminiscing the beauty of those ornaments.

The ornaments poured from boxes, along with memories pouring from lips. A handmade snowflake from my friend Karen. A handmade pressed glass ornament with a head of queen Anne's lace pressed between the layers of glass, and edged in copper...Lora, Brel's mom presented as a gift. A lace angel and a lace bell made by a dear older friend, Dot, as a thank-you gift for the invite to a gingerbread party.

Tim hung the manatee ornament that he gave us the year before as a thank-you for including him in our family trip to Crystal River to snorkel with the manatees.  Such a thoughtful young man... my daughter chose wisely :-)

The plastic Barqs bottle amputation was hung up high, like every other year, by Nathan.  He was, after all, the artist involved with the creation.

Remove bottom of bottle, top of bottle, and drill a small hole in the side near top edge, insert bread tie for hanging loop and voila!  (I included instructions just in case pure envy or admiration had anyone burning to create one of their own)

Amanda (Nate's wife) decides that he must have done it when they were 16, because she can recall him doing it...and their lives have been sung as a duet since they were the tender age of 16. They were 25 that year.

DdotCdot placed the star on top of the tree, and was informed immediately by almost all present that the top needed to be pruned back a bit. I reached into the old vanity drawer and retrieved my small pruners; it took him three tries. "Better to take it a little at a time", he said, "because it's really tough to add it back on."

We added tinsel amidst whining... (it had become a bit of a task to others by now) but I insisted on NO clumping!  And that was the next discussion... about the etiquette involved with 'blobbing' on tinsel...to blob or not to blob? We reached an impasse. I refused to concede; my views stood, albeit disputed by my children.  :-)

I always try to do my part to quell ignorance in this world!


The decorating was done, the stories once again told. All that was left to do was take pictures...because that tree was THE most beautiful tree ever... ever... really...  Or until I decorate another one. :-)    From our family to yours, merry Christmas, everyone. :-) 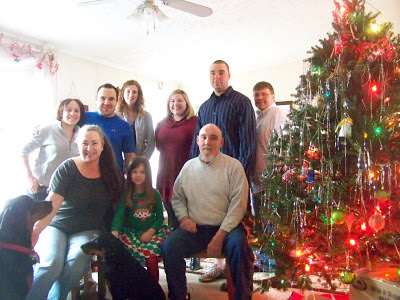