Welcome to Tuesday Two Cents' Worth! Today, Elizabeth Varadan, writer extraordinaire for young audiences is shelling out some excellent advice. The stage is yours, Elizabeth!

The Value of Patience and Persistence – Elizabeth Varadan

All my life I wrote stories and poems, but as an adult I was mainly focused on getting through college, and then a teaching career consumed my time and creativity. I wasn’t serious about writing until I retired early to write full time.
My first lesson in persistence was the reality that, no matter what one’s flair for language and story ideas, one must spend significant time and effort learning the craft of good writing. (My efforts earlier had gone into the art of good teaching.)
Character was my strength, but a supportive writing group helped me discover that plotting was my weakness. I read books on plotting. I reread favorite authors and new ones, paying attention to what made their plots engaging. I took classes. All of that took time, but gradually I saw improvement. Persist in learning the nuts and bolts of your craft.
Lesson number two: Re-write forever. At times, it feels that way. Early on, I wanted to submit manuscripts too soon. A good critique group keeps your enthusiasm high for writing while helping you to resist that temptation. Writing is about more than the quest for publication. It only took me a few weeks to write The Fourth Wish, and the same is true for Imogene and the Case of the Missing Pearls. But I spent couple of years rewriting each one, and then rewriting it again and again – more times than I can count – before it was ready. This is key for those who self-publish: Resist the temptation to get your book published too soon. Persist in making it your best work.
Lesson number three: Keep on, despite rejection. I self-published The Fourth Wish after an online magazine ran it as a serial, because readers liked it. I started a blog, and a world of new friends opened up. From blog friends I’ve learned so much about what’s out there, if you only persist. For Imogene, though, I wanted to be traditionally published. That meant writing more of those dreaded query letters and synopses (which do get easier with time. Anything you persist at gets easier with time.)
But, whether you self-publish or seek traditional publication, never give up. We’ve all heard this, which isn’t the same as living through it – so much disappointment and then picking yourself up again! Still, when I heard that Kathryn Stockett’s marvelous book, The Help, had been reject 60 times – 60! – I told my husband, “Obviously I haven’t been rejected enough! What if she hadn’t sent it out 61 times?”
That made me keep submitting Imogene and the Case of the Missing Pearls, a middle grade mystery involving Sherlock Holmes, until I found the perfect match in MX Publishing, an independent publisher that specializes in Sherlock Holmes books.
So there you are: Don’t stop. Never quit. Persist. 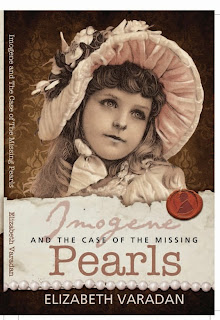 Imogene and the Case of the Missing Pearls can be pre-ordered
at:  http://www.amazon.co.uk/Imogene-Missing-Pearls-Elizabeth-Varadan/dp/1780927584

And at Book Depository:
http://www.bookdepository.com/Imogene-Case-Missing-Pearls-Elizabeth-Varadan/9781780927589 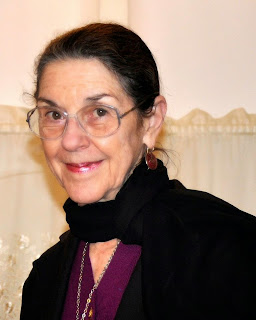 Elizabeth Varadan is a former elementary school teacher. She taught most elementary grades, but her favorites were the middle grades, and she now writes middle grade fiction. She and her husband live in Midtown Sacramento, California, a beautiful tree-lined neighborhood with bookshops and art stores nearby. Her children’s fiction and poetry have appeared in Ladybug, Friends, and Skipping Stones Magazine. Her adult flash fiction has appeared in several online and print magazines, and her poetry has been anthologized in Vine Leaves Journal and The Stray Branch.
Posted by Teresa Cypher at 10:27 PM