WeWriWa: Across the Night Sky 21 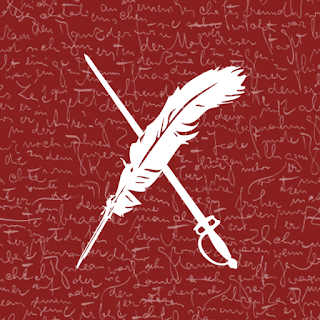 Marissa, abducted human, 20-something, woke with no idea where she was. After running from the metal box she woke up inside, she finds an open doorway. She stepped through and discovered she wasn't alone. She's with an injured man, Kuylerh. There are predatory animals roaming the darkness. I've skipped ahead a bit.  My last post ended with this: On her knees, she pressed against him while working the scarf around his chest. He leaned his face against her and inhaled deeply.

“You’ll be okay.” She drew the ends of the fabric around him, crossed them over and then cinched it snug. When she leaned back to even the ends, he gave her a survey starting at her neck, down to her breasts, lingering, and on down to her navel.

She spit out her knee-jerk thought.  “Knocking on death’s door, but still, well, the award for best portrayal of a typical male goes to my golden-eyed…”

Her words trailed off as she gazed into those gilded orbs that had immediately looked her in the eye when she’d begun to speak. They penetrated her with such kindness, such gratitude, such… Words failed her.

She finished the knot by tying a bow on the front of his chest, cinching it tight to apply solid, steady, pressure. Then she sat down, her back against the wall, and helped him move to where his head was again on her lap.

She brushed loose strands of onyx hair from his face while he gazed up at her. Hysteria threatened again at the sight of him… with that big, blue bow… like a gift just waiting to be given.

That's it for this week. Thanks for visiting. Comments are deeply appreciated.