A to Z "C" Colloquiallisms: This Yinzer is proud of them.

If I said, " "After yinz redd up the room, run the sweeper."  Would you know what I meant?

Let me begin this most fascinating aspect of human language by including a definition  of Colloquialism. "b : a local or regional dialect expression".  Taken from Merriam Webster Here

I never gave much thought to it--having grown up in the boonies, that I spoke differently than people from other parts of the USA. We all spoke English, right? Humph, good enough for me.   And then *drum roll* enter the nuns.

The nuns...the purveyors of knowledge at my primary school.  And after being "taught" that several words were not, in fact, proper words at all, a slap across the knuckles with a ruler was used to remind those of us with short memories.

Still, I was a gal from the rolling hills of western Pennsylvania.  My ways persisted.  For years.

When my daughter went off to college, I never dreamed that her pursuit of an English degree would be such a cool second-hand lesson for me.  But we enjoyed every moment of it that we shared on her weekend trips home.  It was then, I began to pay attention.  I mean, really pay attention to the words that I said-- and everyone else said, as well.

I recall her statement to me, when after several weeks of telling me about her class, I  told her that I had begun to catch myself when I said things that were...well..wrong. *smiling*  Her words, "I"m not. My friends poke a little fun at me for the way I say things...but it is my dialect. It is part of who I am."  She made me so proud.  Really, she did...and she does...

Colloquial expression, perhaps more often thought of as dialect, can be as local as a  few miles. That was a crazy idea for me to wrap my head around.  But, umpteen years later, I do not dispute that at all.  Dialects can develop within small towns, within high schools, within various types of communities.

Families can use dialectic expression.  Just little differences in the expressions and words they use when speaking to each other.

Now, for the sake of brevity, I will stop going on and on about this, and conclude this post by sharing examples of a better known colloquial dialect. It is Pittsburghese.  On one hand, there are words that seem to be just completely fabricated. On the other hand, many words simply have a Pittsburgh twist added.   And it would not be complete without actually hearing a sample of it as it is spoken.  And then you will be quizzed on it.  Nah...just "jaggin" yinz." No quiz.   Oh, I had to slip in that use of  "jag" as a Pittsburgh verb.

"Yinz enjoy. Now, to finish cause this needs posting." (Yinzers tend to drop the "to be" after the word Need/needs) 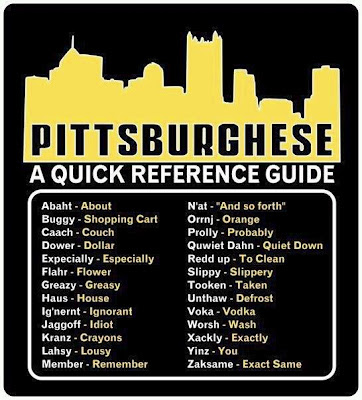 And, without further ado, a video/audio sample of the dialect as spoken during a moment of high agitation--when a tornado approaches.  This video has been referred to as the "yinzer tornado".

Interesting article on it Here.  Please, if you have noted your own local dialect, share an example.
Posted by Teresa Cypher at 11:20 AM