A to Z "H" is for horseradish: A bitter herb that runs wild.

Horseradish...love it or hate. There seems to be no middle ground.

My boss's 80 year old father gave me a "start" of it two years ago.  Midsummer. Tough time to move a plant. When their bright green leaves should be busy, photosynthesizing energy to support a comfortably established plant, these poor things were being jerked out of the ground and moved in the high heat of summer.

I gave it a spot in the corner of the garden where shade prevails most days.  I tucked chucked it into the ground and told it, "Behave yourself. I'll only put up with so much. This is your corner, and when you start to explore the rest of the garden, I will drag you right out of that ground quicker than you can say cocktail sauce!"

Two years later, even with drought summers and lack of sunshine, it has prevailed and is running across the dirt like gardener's garters. You do have to admire its tenacity.

So, dig it up I will. Not only because it has (as expected) misbehaved, but its unwanted neighbor, a dock that greatly resembles it, has set up shop practically intertwined with the stuff.

I approached the garden with a sharp shovel. The afternoon was breezy and cool, and the sky was splotched with patches of blue. About "enough to make a pair of Dutchman's britches" as the old timers used to say.

Speaking of old timers...they said a lot of things.  Back around the road, at the neighbor's, where the valley seems to drop down to nowhere, some seventy years ago the local fellas used to meet to play cards.   My dad used to like to tell about one springtime evening when they were playing cards and drinking some "shine" out of water glasses.  He was just a teenager. It must have been a month that had the letter "R" in it, because you don't dig up horseradish in the other months.

Before they knew it, the dares to drink a glass of shine had turned to a dare to "drink" a glass of freshly ground horseradish.  One of the neighbors did. "Damn near killed him." my dad used to say, with a gleam in his eye.

It's also one of the "bitter herbs of spring" the old timer's ingested to "flush out winter".  A spring tonic. I suspect there might be science behind that.  The properties that make some plants bitter also inhibit bacteria from binding with protein--like that found in the urinary tract.  Dandelion and cranberries-both bitter, have been used by herbal practitioners to treat UTIs.

So, I set to work: The left is what I was facing. The horseradish is easily identifiable at this stage by the fern looking leaves in its center. The middle photo shows how it was escaping out of its corner. The photo on right shows that there is no other way to do it but dig in the dirt.

On left is a large, two year old root--woody and too tough to use. but it can be replanted to produce more roots.  Center is tender roots ends from a two year old plant, and on the right is the corner of the garden, weeded, replanted, looking as it should. 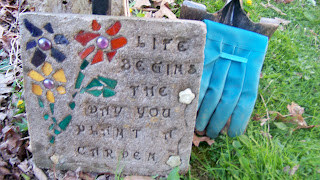 "Life begins the day you plant a garden."  To which I say:

Escaping begins the day you plant a horseradish. :-)