A to Z "W" is for Willow: willow-ware, blue willow

It was quite by accident that I started to collect it--much the way many collections begin.  You get two, someone notices, and then everyone start to pick up the items to give to you.

In my case, it was a couple of blue willow plates. Somewhere, buried in my memories, was a familiarity with the pattern.

So it began.  And one piece led to the next, each one scrounged up at flea markets...for a quarter here, a dollar there.  I can't ever sell any of it. I think back and I can see the proud and eager faces of my children when they approached me and held out a "prize" of a find...they had spent their allowance on blue willow for me. 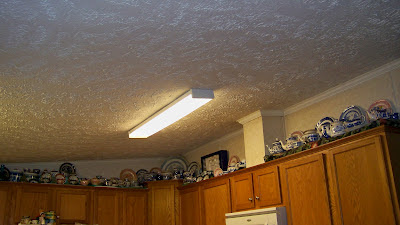 Then the day came when I said, "Enough."  And it became a rule that no more blue willow was to be bought.  Still, for a while, occasionally an odd piece would trickle in. My children still managed to find some real unique things, and my husband, bless his heart, started going to antique stores looking for the stuff.  That was never the plan. I don't mean to sound ungrateful--because I am not.  But, it has been a very long time since a new piece of blue willow trickled into this house.  And that...is a very good thing.

So, I will share with you what I think I know about it.

The Chinese were well ahead of the Europeans discovering under-glaze technology on pottery.  Suddenly, the western world was inundated with this new type of dinnerware--and it was waterproof.  And it had these great designs painted on--that didn't fade, wash off, or become part of your meal as you ate.

The western world couldn't get enough. Trade ship after ship were weighed down with plates from China. 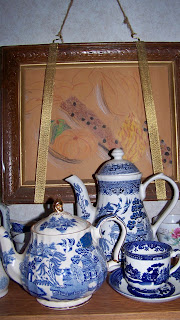 Blue dye for the under-glaze was more easily obtainable, thus the blue color.  And the potteries in the far east liked to paint landscape scenes.  Those scenes included their lotus trees and their willow trees, too.

The Europeans made haste to develop their under-glaze technology, and soon were producing fine, shiny, waterproof dinnerware that could rival that of China. Still, they were only cutting in on the oriental imports--not replacing them.  This blue and white pottery phenomenon was still going strong and people couldn't get enough of it.  The English potteries came up with an idea.

They injected a human element into the landscape design. In fact, they invented an entire story and changed the scheme to include some key elements that helped to tell the story.  The large palace, the two doves, the bridge with three men carrying weapons, clouds, and a boat.


Everyone loves a good love story, right?  And heartrendingly bittersweet makes it even better...like the kind of story where the lovers die for their love--then live on in eternity--together.

Thus, the English got it right.  There was a King whose daughter fell in love with his secretary.  The King forbade their love, so they fled. The King sent his henchmen after them but the young couple escaped in a boat. Heading out to sea, a storm blew in, and the lovers were never seen again BUT, the two doves appeared in the sky immediately following the storm.

It worked. The English potteries had a best-seller on their hands.  Blue Willow became the number one selling blue and white pattern EVER in the history of the world. 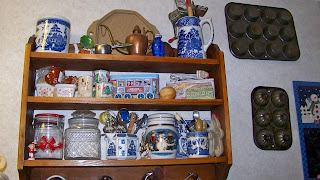 I know...Blue Onion is popular, and even Currier and Ives by Royal China...but neither came close.

Blue willow is not just one design. Every pottery in existence (world-over) that could design a blue willow pattern, did. And they changed things just enough so that customers couldn't look for the best buys from several potteries...such as a set of plates from Spode,  a sugar and creamer from Wedgewood, and a teapot by Minton. If they did that, then they would not have a matching set.  So, that is why it is sometimes difficult to identify a piece of blue willow.  There were so many versions made.  And that is why you will find pieces that miss one or more of the original elements. There is no particular design requirement for a pattern to be called blue willow.

About a decade ago, my mom gave me an oval bowl from the back of her china closet. It  was blue willow.  She told me that when she got married, one of my dad's old school teachers gave them a complete set of Blue Willow as a gift.  It came with everything--napkins, candles, service for eight plus completers. The oval bowl was the only surviving piece. I could not remember ever eating off of blue willow.  My mom and dad had been married for eleven years when I was born, and 6 older siblings preceded me.  I suspect that the dishes were long gone, then.  :-)  But...in spite of not being able to recall eating off of them, perhaps a few survived during my toddler years?  I must guess that that is where my sense of familiarity with the design came from.

We use blue willow everyday for our dishes.  No reason not to. Life is too short to eat off of plain old plates while saving the pretty ones for a special day. Every day must be special at our house ;-)

Have you ever collected a couple of things--and someone found out..and then it went  sort of bonkers--out of control?