A to Z "M" is for Mold: assault weapons of the vilest form

Molds are a nuisance, but...they are extremely important to the world's ecosystem, performing a myriad of jobs that no other type organism can perform.  And in spite of the bad rap, and the problems mold can cause, it can also be the bringer of miracles.

The plant statins in cholesterol lowering drugs come from molds (and yes--for the sake of argument, some yeasts).  The immunosuppressant drug cyclosporine,  used to suppress the rejection of transplanted organs, is derived from the mold, Tolypocladium inflatum. And the discovery of the drug, penicillin, derived from the penicillin mold, is credited with having saved over 6 million lives.


There are molds that contribute to large production processes by performing a specific task--like consuming the carbohydrates to aid in the fermentation of soy sauce.  And, there are bio-pesticides, bio-herbicides, and soil enhancements such as the mycorrhizal molds found in Miracle Grow® potting soil.

So, this is all great news.  And mold can be a wonderful thing. BUT, the really cool part about molds are the mechanisms they use to disable and then consume their food sources. This IS the stuff that science fiction monsters are made of.

Here we have the hyphae (thin strand of growth--sort of comparable to a plant's roots) of a Trichoderma mold parasitizing the larger hyphae of a different organism. The Trichoderma wraps around the hyphae, getting a "grip" and then it actually punctures through  the outside surface of the larger hyphae and sets up shop--making a living off of the other organism.  There are various ways molds do this, but suffice to say, they are quite efficient.
Photo credit: sciencephoto.com

Penicillin is a volatile produced by a mold.  The mold makes it to fend off bacteria. Voila!  When we take that volatile that the mold produces, it fends off bacteria in us. :-)

Then there are the out and out parasites.  Here, a Beauvaria mold infected and killed this spider.  One day it was simply cruising through its turf, unsuspecting. It didn't notice the spore drifting near. It didn't notice the sticky surface of the spore grabbing hold of its exoskeleton. It didn't even notice that it had developed a spot on its body that was being eaten away and was now covered in white fuzz. And then one day, it just couldn't force itself to move. It stopped.  And there it died...while the hyphae ran through its body, colonizing and consuming as it went.  And finally the day, unbeknownst to the dead spider, its exoskeleton remained, intact, covered with a telltale white fuzz.  Testament to the power of a tiny mold spore.  Life...and death, fought out everyday... on a microbial scale... 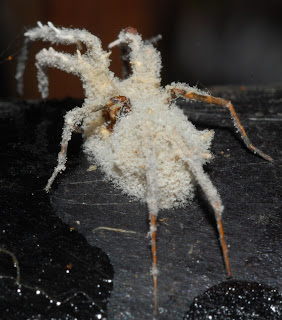 And here,  a Metarhizium strain infected and killed this cockroach.

Important to note--these insects were not consumed by a mold after they had died. They were infected by a mold which caused them to die.  This is a huge field-- Biological Integrated Pest management.

And it gives writers really cool insight into how life works. Everything has to eat something. Doesn't matter if it is a microbe in your garden soil, or ET cruising in through a wormhole from 120 light-years away...

This fascinates me.  I live by a rule--that as long as I can go to work and look at mold through a microscope and then say, "Cool...look at that, would ya!" That I have nothing to complain about.  I have the best job in the world.  And it is helping the earth...chipping away at our need for synthetic pesticides and herbicides.  Okay, I could go on and on, but will stop here.

What do you think of molds?
Posted by Teresa Cypher at 11:23 PM